India, with Harendra Singh, aim to edge back up to the top

The appointment of Harendra Singh as coach earlier this year signals the start of a new era for Indian hockey. And a convincing 4-0 win over arch rivals Pakistan was their perfect start to the Champions Trophy.
by Matthieu Bos

India’s coach Harendra Singh has been in Breda before, years ago, when as a member of the Young India team, he played in a friendly against local club Push. Back then he was not a known face in India but since the Hockey World League in 2016, his career has blossomed. As coach of the women’s national team he won the Asia Cup last year and since the end of April he has been in charge of the men. ‘The team is a good balance of talented youngsters and experienced old hands,’ he says. ‘I want my team to play attacking hockey, which fits with the Indian game.’

His appointment brought to an end a long list of foreign coaches, including Dutchmen Paul van Ass, Roelant Oltmans and Sjoerd Marijne. Sardar Singh, who used to play for Dutch club Bloemendaal and has 298 caps for India, says the squad have learned a lot from their Dutch coaches. ‘We learned from them as individuals and as a team,’ he says. ‘But they are no longer our coaches and the focus should not be on them. Harendra is a good coach who has made a lot of progress over the past few years. I am happy with him, because he has a good overview of my qualities and tries to utilize them. And seeing as he coached a number of the players with Young India, he knows a lot about a lot of us.’ 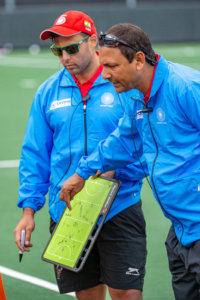 Harendra Singh directs his players ahead of a friendly against Argentina. Photo: Rene Roelofs/Orange Pictures

‘It is a great tournament to take part in,’ says Harendra Singh. ‘And because this is the last edition, we are extra motivated to perform well. A good performance means you are part of the rich history of the Champions Trophy and that is what we are aiming at.’

The tournament will be an important indicator for Singh’s squad. How will they measure up to the likes of Argentina and the Netherlands? ‘We’ve had a good training camp at home,’ says Sardar Singh. ‘This is a good moment to see if we can realise our goals. This is the first occasion we will have had to see if we can pull it off against the bigger teams.’ 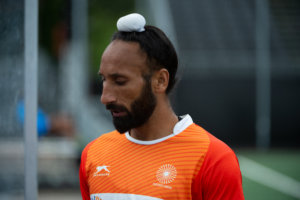 Sardar Singh, one of the stalwarts of the Indian team. Photo: Rene Roelofs/Orange Pictures

‘We want to be a real part of this tournament and play against the best,’ says Harendra Singh. ‘But we are in a new phase as well. The team is progressing.’ The main aim, he says, is to win an Olympic ticket at the Asia Cup, as well as perform well in the World Cup.

India has always been keen on hockey and now the team is beginning to catch up on the top performers. Oltmans started it off, and now it is up to Harendra Singh and his staff to continue moving upwards. The Champions Trophy is the first big hurdle on the way to new Indian success.