The reigning Olympic champions are bringing in new, younger faces, but the experienced old hands still have an essential role to play. Saturday’s 2-1 victory over the Netherlands put the Argentines on the right track to win their first ever Champions Trophy.
by Matthieu Bos

Coach Gérman Orozco smiles when reminded that the Argentine men’s team have never won the Champions Trophy, although the women have taken it seven times. The men’s team have not taken part in this international competition very often, and have never been within reach of the gold medal.

Orozco is well aware that his team have lived under the shadow of the women’s success for years, but that they are now emerging as a winning team in their own right. ‘When I make my speech before the first match, I will definitely mention the statistics,’ he says. ‘It might be the last Champions trophy, but it could be our first win. And that should be extra motivation.’ 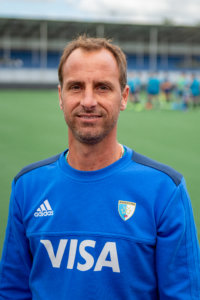 Gérman Orozco, who has been head coach of Argentina since the beginning of this year. Photo: Rene Roelofs/Orange Pictures

Orozco got the job at the beginning of this year, after Alex Verga turned down the role. The 42-year-old former international has a mountain of experience in Europe and elsewhere. He played in Germany and for Dutch club Oranje Zwart, but this is his first big role as a coach. ‘We are trained as a team to have an organised defence,’ he says. ‘You need to be balanced and for us, that begins with a solid back line. Our other strength is the penalty corner, and the way our forwards fire dangerous balls into the circle.’

The penalty corner specialist is Gonzalo Peillat, who now plays in Germany, but who was top scorer in the 2015-2016 Dutch competition with 33 goals when he played for HGC. ‘It is great to be back in the Netherlands,’ says Peillat. ‘And playing against the Netherlands in our first game makes it extra good. This is the game with the most tension.’

Orozco replaced Carlos Retegui, who turned the Argentine squad into an oiled machine. Winning the Olympics, and beating Belgium and Germany on the way, was proof that there is a new team at the top. That win has created great expectations back home. On top of that, some of the players, such as keeper Juan Vivaldi (38 and 240 caps) and Matias Paredes (36 and 322 caps) are no longer the youngest. ‘We are on a new path, with lots of new and younger players,’ says Orozco, referring to the likes of forward Maico Casella (21) and defender Nicolas Cicileo (24).

‘The youngsters have a lot of new things to learn and the old hands have to invest in them, with one eye on the future,’ he says. ‘They can teach the newbies how to win important matches, with the experience they built up at the Olympics.’ Orozco places a lot of emphasis on experience and encourages the likes of Vivaldi and Paredes to mentor the newer players. 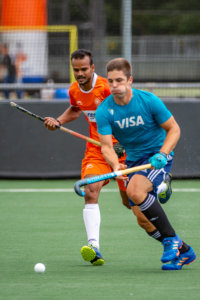 Pelliat, who has 136 caps and is 25, is somewhere in between the old hands and the new faces, but understands the need to bring in youth. ‘A new coach means things change for the team,’ he says. ‘The older players are very valuable on the pitch, but off the pitch they contribute with their experience. They support the new players and give them confidence to develop. I still feel like one of the youngsters but I try to bring everyone together. Ultimately, they have to be at their peak during the World Cup at the end of this year.’

Orozco agrees that the world championships are the key event. ‘Of course it would be great to win the last Champions Trophy but the results at the World Cup are what count most of all. That is where we want to shine.’ In the meantime, in Breda, Orozco and his team could still fill that one gap in the Argentine trophy case.