Coach Anthony Potter is living his dream with the Kookaburras

Australia, the reigning world title holders, are regarded as favourites for the final edition of the Champions Trophy. As defending champions, they will show the world what they can do in Breda, says assistant coach Anthony Potter.
by Eelko Wester

‘The Kookaburras are a way of life,’ says Potter. ‘Just look at the lads.’ The Australian team are warming up for a friendly against Germany, as part of their Champions Trophy preparations. With captain Aran Zalewski in charge, they sprint on command, in couples, with a yellow ball they pass back and forth, synchronized like swimmers.

‘We coaches don’t have to do anything when it comes to warming up,’ says Potter. ‘They take care of it themselves. This group is so independent, so professional. And they do whatever we tell them, without questioning as well.’

It’s a sign of the mental strength of the Australian players who make great sacrifices for their sport. As an international, you have no choice but to move to Perth where the national team trains. ‘Australia is big. Players come from all over the country,’ says Potter.  ‘The lads are a close-knit group and everyone is an equal. And a lad like Eddie Ockenden, with more than 300 caps, still carries the water cans.’ 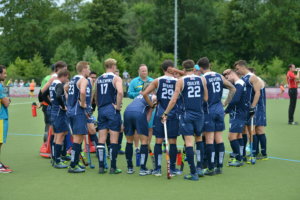 Potter was born in Cairns, in the north eastern state of Queensland. He played in the national team but picked up 90 caps as an indoor player. He has worked as a coach in the Netherlands and Belgium and left Nijmegen in 2017 to assist Colin Batch with the Australian men’s team.

‘Our players are tough,’ he says. ‘A push or a shove does not bother them. We do get criticized for being rough, but I’d dispute that. They play hard but fair. They grew up with Rugby League and Australian rules football. You have to be strong to play that, it’s a tough game. From an early age they learn to stick to their ground and not to fall over. And you can see that in the way they play hockey.’

The nickname Kookaburras, after the Australian bird, is more than a marketing tool. ‘Kookaburras are special,’ says Potter. ‘It’s a way of life. They have their own rules, and you see that in the way new players integrate into the group. And after the match, they all help clear up the dug-out and leave it clean and tidy. They may be close-knit, but they are very open to others. If Australia play on their home turf, the players will invite the person from the other team with the same shirt number. They pose together after the match. That is part of the way they spread their hockey culture.’

It was Potter’s dream to work with the Australian team, and, he says, he knew he had to win their respect. ‘How did I do that?,’ he says. ‘I asked questions, I taught them new things, you come up with good game plans which they like. In the end, it is a question of trust. We train 10 or 12 times a week. We teach them the sort of hockey which we want to see played and give them ways to get better. And they love you for it.’ 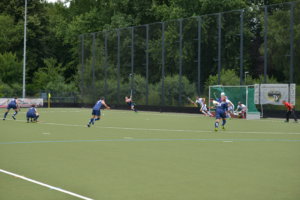 Penalty corner for Australia, in the friendly against Germany. Photo: Franz Christoph Sauer

Australia’s line-up at the Champions Trophy includes old faces such as Blake Govers, Daniel Beale and Eddie Ockenden but a lot of new faces as well. ‘We’ve had quite a bit of turnover since the Rio Olympics,’ he says. ‘It takes time but it is working out well. We’re making advances. We won the Hockey World League final last year, which we did not expect. That victory boosted our self-confidence and the team realised all the hard work had not been for nothing.’

The Australian team have dominated the men’s game for some time. They are reigning World and Champions Trophy champions – which they have won 14 times so far. In their preparations for Breda, Australian have been keen to play as many European sides as possible, all with one eye on the World Cup in Bhubaneswar later this year.

‘That is why the teams in this Champions Trophy are not putting all their cards of the table,’ says Potter. ‘It is a good moment for young players to show that they want to go to the World Cup. I expect an exciting competition, thanks to the old Champions Trophy concept of everyone playing everyone. It’s exciting from the first whistle. We are confident. We are number 1 in the world and in Breda we can show what we stand for.’