The Red Lions are after their first title

Belgium have been making great strides internationally, but have yet to win a major competition. The Red Lions hope all that will change in Breda.
by Marco van Nugteren

It is in the eighth minute of a friendly against England that Belgium’s New Zealander coach Shane McLeod begins to laugh. He is enjoying the game, especially the clever tip-in from Florent van Aubel which hits the top of the net. But there are just a couple of hundred supporters to watch the game, which could have been branded as the perfect preparation for the Champions Trophy. 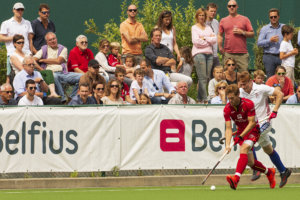 Few people turned up to watch Belgium’s last international ahead of the Champions Trophy on their home turf. Photo: Orange Pictures/Erwin Goossens

Compare that, for example, with the thousands who turned up to watch the Netherlands’ final four matches in the Rabo Super Series. In Belgium, the Red Lions’ preparations are much more modest.

Three of the four games, like the match against England, took place on the grounds of Antwerp club Royal Beertschot in Kontich. It is a chic club, and supporters watched from the balcony while enjoying a glass of wine

‘The hockey association did not put much effort into promoting this match, which is a pity,’ says defender Arthur van Doren, after the 3-2 win, as he signs autographs for the three children waiting for him. ‘If you push a match like this better, lots more people would come to watch, especially at 3pm on a Saturday afternoon.’ 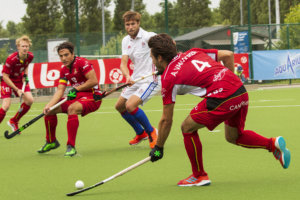 Nevertheless, Van Doren describes the match as ‘average’ and says it is lucky that there are weeks to go before the World Championships in India. It is a statement which says much about what the Belgians think about the Champions Trophy.

Shane McLeod shares that view. ‘Our first aim is the World Championships,’ he says. ‘Everything we do now, is about playing well there. We want to use the Champions Trophy as preparation. And of course, we want to reach the final. That would be the best possible way to get ready.’ 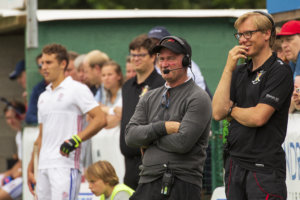 In 2016, at the Rio Olympics, the Red Lions lost their first final to a stronger Argentina. A year later they gave away the European title to the Netherlands 2-4 despite having a 2-0 lead. During the World Hockey League final in India, they won all their group games convincingly, but stranded in the quarter finals after shoot-outs against India.

The timing would be perfect

‘Winning a title takes time,’ says McLeod. ‘We are not obsessed by it. It is a question of waiting until it happens. And we’ve got a group of young talents on the way, who have already won tournaments.’

Van Doren points out that there are five other teams competing to win the title in Breda. ‘Who the eventual winner will be almost depends on what form they are in on the day. No team stands out at the moment,’ he says. ‘But we are on the right track. It would be great to win the Champions Trophy. The timing would be perfect. Because it is the last of its kind, I bet we would get to keep it.’ 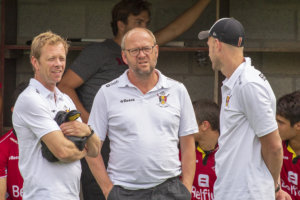