Pakistan are the ‘sentimental favourite’ to win

Pakistan are in the line-up at the final Champions Trophy because they developed the event in 1978. Their coach Roelant Oltmans says his team are ‘totally unpredictable’.
by Sander Collewijn

A Pakistan player dribbles into the circle while looking at the pitch, weaves round two players and misses the goal. The man in the hip white glasses who is watching, waves his arms and shouts: ‘You are not looking, you are not looking.’

Dutchman Oltmans is 64 but has eternal youth as a coach. He had the same amount of energy 40 years ago, but missed the wisdom he now has after taking charge of the Dutch men’s and women’s teams, as well as a spell in India. His job in India came to an abrupt end last year, despite the improvements in the game, when he clashed with the Indian hockey association about the selection procedure. Pakistan had seen what Oltmans had achieved with India and brought him back. He had already coached Pakistan in the early 1990s and at the Athens Olympics.

As the training session at Leiden hockey club draws to a close, the group break up into smaller teams and play against each other, saying ‘super’ when one of the number performs a skillful move, and laughing a lot.

‘This is what I enjoy,’ says Oltmans. ‘Working with a group like this, who have fun with each other. And if I can make the group and each individual play better, then I’m happy.’ 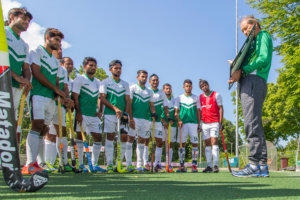 Nevertheless, the budget is limited and the team are sleeping in seven rented holiday houses in Noordwijk during the tournament. There are other issues to contend with too. Pakistan’s physiotherapist was denied a visa and a Dutch physio has filled in on a couple of occasions.

Oltmans says he wants to leave a legacy in Pakistan which is about more than just short-term success. Measures need to be taken right down the line, to the youth. But there are obstacles to overcome, and money is not the least of them.

Pakistan, currently ranked 13th in the world, have been invited to take part in the Champion’s Trophy in their role as founder of the event in 1978. They are the ‘sentimental favourite’ and underdog in a line-up that includes the best teams in the world.

The team are pleased to have been invited and are trying not to live in the past, says Oltman. ‘Shabaz Ahmed, a former star player, gave an interview recently in which he said that we have to look to the future and develop. The Champions Trophy is the ultimate test for the Asian Games in Jakarta in August. There we can qualify for the Olympics. And if we finish fourth in Breda, we’ll have done a good job.’

Pakistan start their campaign by playing India in the opening game of the tournament, a match between two arch rivals and both with a terrific Champions Trophy history.  ‘The game against India is the match of the tournament for us, but we have to play well,’ says Oltmans. ‘It is a mistake we make too often, just looking at the current match. But on Sunday, we have to play Australia, and they are the world champions.’ 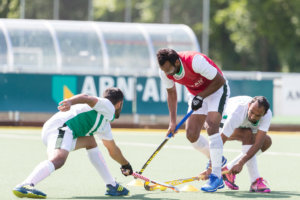